New Orleans is the place to be if you love jazz as much as I do. My hubs and I just got back from an awesome weekend there, and I want to go back as soon as possible! In most of the cities that I’ve scoured for great jazz, there’s maybe one or two acceptable stops, and they’re normally across the city from each other. But NOLA’s Frenchmen Street is club after club of great music every night of the week! Vaso, The Three Muses, and Snug Harbor are just a few of the best, but one stands out from the rest. The Spotted Cat Music Club. 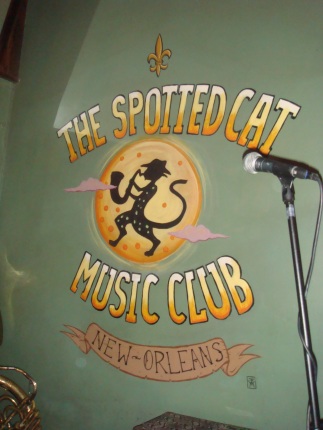 The logo on the wall of The Spotted Cat in New Orleans. Aug 2012

While sitting front-row and watching awesome groups like Meschiya Lake and the Little Big Horns, I wanted to do my own take on The Cat. I wish I could come up with a name that suits him, but I think he’s just too cool for that. 😉

I also drew a quick sketch of Miss Meschiya, but I’ll do a separate post for her in a bit. Enjoy, and keep it jazzy!