Gosh, God is doing some really fun things lately! So Koda’s owner, Jeff, is a Team Captain for his area’s Relay for Life event coming up at the end of this month. Since he liked his Koda pic so much, he asked if I would be at all willing to draw up a piece that they could sell through a silent auction to benefit Relay. This is just the thing I would love to give my time and talents to, so I told him I was all in. My only hesitation was time, since I knew there would be a deadline for this kind of thing and Little Lady could want out whenever. But I’m pleased to say that after about two weeks of dedication to this project, I sent it out to Jeff today, and I’m thrilled to be able to be part of this!

I’m sure by now you’re asking “So… Where’s the Art?” Before this turns into an artistic Wendy’s ad and Clara Peller comes knocking on my door, I’ll show you. Here are the three reference pics Jeff sent.

“Twin Falls from Side” Original

I had a terrible time choosing the right one to work from. I loved the idea of recreating the Falls, but I thought the pic of the River would maybe be easier to get done in time and a little more defined. So I took that one to Black and White for my charcoal work. 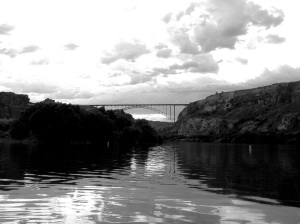 Finally, I was ready to get started. Here are the pics of the whole process. It’s fun to look back on it step-by-step. And maybe someday I’ll learn, especially with charcoals, that I need to start on the right side of the picture since I’m left-handed. It would be SO much easier that way…

I’ve been really critical of my work on this piece since I’m not REALLY a landscape artist. It’s definitely not my forte or passion. But I certainly had fun trying and I hope it reels in a good amount of cash for the Relay team!

I also had a great time learning about this area. I got started on this project, then finally wondered what I was actually drawing. I know next to nothing about Idaho other than that its potatoes are tasty. Jeff told me this is the Perrine Bridge spanning across Snake River. Of course, I had to look them up right away, and I learned that the Perrine Bridge is famous within the BASE and bungee jumping crowds because it hangs 486 feet above the river. How thrilling! I think I’ll keep my feet on the ground, but art is a great way to “dive” into learning about a place like this!